UGH!  The dreaded post of them all, but we’ve got to start somewhere.  Here is my journey in a nutshell…

When I was in grade school (K-8) I was very active in sports and while I developed early and was a bit curvy, I was not fat.  I went to high school and got lazy and in my opinion, got fat.  This continued into college and grad school and then in November 2010 I decided to give running a try.  I started myself on a couch to 5k running program that was 12 weeks long and got a personal trainer.  I cut out all alcohol and ate pretty dang well.  This was also the time before kids, when I was able to finish work at 5:30pm and then spend almost every night at the gym.  I lost 45 lbs.  You will notice that I will never discuss what I actually weigh, I will just share what I have lost.  Why?  There are several reasons I suppose (and if it makes you feel better my husband doesn’t even know).  Surprisingly, it is not because I was 300 lbs (actually not even close), its more because my “goal” weight is not what most people would think it would be.  130 on me would not look right (I’m serious).  People told me the first thing I would lose was my figure.  When I was working out all the time and lost 45 lbs, this was not the case!  Thus, I don’t feel 130 is appropriate for me and my husband does appreciate my curves.

Anyways, the benchmark for my weight loss travels will start at my workout weight.  Here is a picture of me from around that time.  See… curvy.  I like my curves.  I was happy here (maybe 10-15 more would have been perfect). 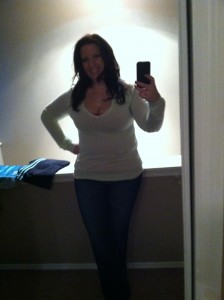 After my husband and I started dating in July 2011, within 2 months, 10 pounds had creeped on.  This was to be expected, as my husband will be the first to tell you that eating right and working out is not his thing and he was fun to be around so I followed suit.  I constantly said “I need to get back to the gym” but eh… I had time for that, right?  Not so much.  I found out I was pregnant in February 2012 and I was 20 lbs heavier than when we started dating, in other words, only 25 pounds left of my weight loss.  I had just started working out again too so I was a bit worried what I would look like post baby.

I ended up very swollen at the end of my pregnancy, for the first 30 weeks I had only put on 15 lbs but by the time I gave birth I had gained 41 pounds.  I had thought that most of that would come off after giving birth.  This was the night before I went into the hospital, October 14th, 2012.  Extremely swollen!! 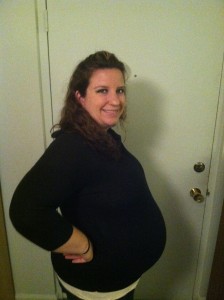 My first appointment after leaving the hospital I had only lost 10 of the 41 lbs (keep in mind 20 from pre-pregnancy and 41 from the pregnancy means I wanted to lose 61!).  After 2 weeks I had lost 25.  At this point I stalled out for months.  I went back to work in January 2013, 36 pounds heavier than when I was working out.  My pre-baby clothes did not fit!!  I was absolutely miserable and fat feeling.  Finally in March 2013, I had enough.  I went back on a strict plan.

This plan was extremely hard to execute, at this point we had just bought our house and I had no work from home days.  I woke up at 6:30am and did not make it home until at least 6:30pm with driving Lydia all over the place (our mothers live far away from work– though we do appreciate their loving care!).  This meant that I had to prepare.  I cooked every night and packed my lunch every night.  I stuck to a 1,200 calorie diet using MyFitnessPal from March 25, 2013 until May 19, 2013 when my husband and I went on a cruise.  At this point I had lost 16 pounds (20 left).  I had also started running outside (my previous adventures were always in a gym), I downloaded the couch to 5k app on my iPhone and just ran in our neighborhood 3 times a week, but I was not strength training, thus not toning.  Here is a picture of me on our cruise. 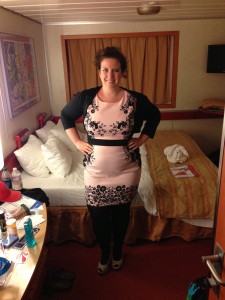 Since this picture, I have lost 7 more pounds, bringing my total weight loss to 23 since going back to work!  As you can see I still have the baby belly pouch and  I don’t show my arms because I have not been strength training so ewwww!

From the end of May until the end of July those additional 7 pounds have not come from any effort at all (surprisingly!).  The day we got home I fell pretty hard down the stairs which put me out of commission for a while.  I stopped tracking my food and I have not been running.  I have a decent idea of what I am eating every day but as time goes on, I have become less and less strict.  I am only 14 lbs away from when I was working out before (this is so attainable!) but because I have not been strength training, I am flabby.  I could lose those 14 pounds but I won’t feel like I did in the first picture… so here I am back on the weight loss kick, but this time I need to track my calories, run AND get my butt to the gym to lift weights!

How will I find the time to do this?  You might be able to guess that the rest of my posts in this category will follow my un(successful) journey towards a flatter tummy and toned arms!

How do other working moms find the time?  How do stay at home moms make the time?  I want to know, share your successes with me!