Skip to content
New Spreadsheet: The Family Boss Spreadsheet™ Helps You Manage Your Home All in ONE Place!

This post may contain affiliate links, which means if you purchase from one of these links I will receive a commission. Please read my full privacy policy for more information. 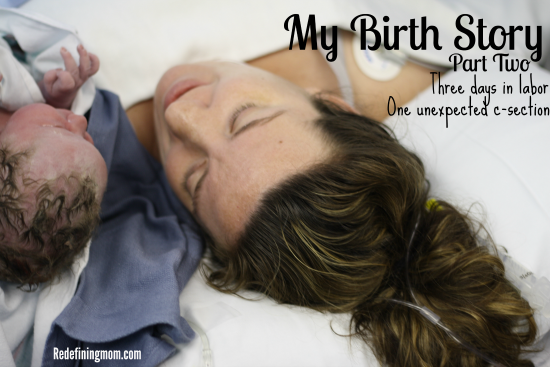 If you missed Part One of my birth story you can catch up here.

On day two, after going through round two of the Cervadil, the Pitocin was again turned up to the max over the course of 12 hours. On the fifth try, the doctors were finally able to inset the foley bulb. The doctors provided no warning as to what to expect about the awful pain this would cause. Five attempts to insert the foley bulb was pretty brutal, but upon having it inserted and standing up to go to the bathroom, I felt as if my insides were being yanked out of me. This is when I asked for an epidural, I was in blinding pain.

Once the epidural was put it in, I was unable to get up and walk around anymore. This led to a pretty uneventful day for me since the epidural was inserted from the intense pain from the foley bulb and not because of extreme active labor pains. At 1am in the morning on day three, we discovered my cervix had manually dilated to 5cm because of the foley bulb but I was still not in active labor. 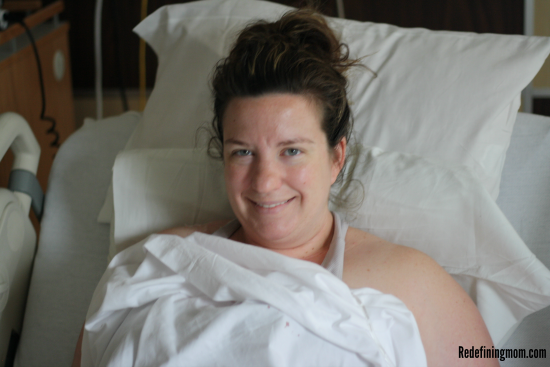 The early morning hours of day three was the turning point for me. As the doctors examined my progress a call needed to be made whether to break my water or send me for a c-section. How many women have you heard of that were put on Pitocin 3 times over the course of 3 days? It seemed quite obvious to me that my body was not responding to it! After two days of going through all of this, I was so exhausted and not in any condition to argue with the doctors. This is the point where I wish I had advocated for my water to be broken because it was the point of no return and the c-section train was headed my way.

The attending on duty through the night promised me that if I tried Pitocin one more time and it didn’t work then they would send me for a c-section. They said Lydia would be born no later than 6pm on 10-17-12. I should have known that I was only being told this because the attending on duty did not want to perform the c-section or have it be “his” call. At this point, there was still no mention of my water being broken.

Remember, with the laborist model, I had no advocate of my own. I do not have a doctor that is “mine” and is looking out for ME! I had read everything I could get my hands on through my pregnancy about labor and birth and attended birthing classes, so why did I let them get away with this? I am an assertive person, to the point of being called opinionated, and yet I allowed them to push me off while I gushed blood and no one had the guts to make a realistic call for treatment!

During the night, we had an amazing nurse who only had me as her patient and stayed in our room monitoring Lydia’s heartbeat and telling us her life story. Rob was able to catch up on sleep while the sweet nurse kept me company. This was a welcomed change from the night before when I had a nurse who would yell at me for trying to get comfortable with a zillion tubes coming out of me.

This nurse also felt that it was not right that the different attending shifts would not make a treatment decision that was consistent for me.

At 4am on 10-17-12 I was placed back on Pitocin but by 11am it was clear that it was not going to send me into active labor. The new attending did not want to give me a c-section despite the promises of the last attending, he tried to convince me to break my water.

BREAK MY WATER AFTER NOW?!

Don’t you think the time to break my water may have been on day one or maybe (gasp) on day two?? Keep in mind, I now had the epidural in for 24 hours and could not get out of bed.