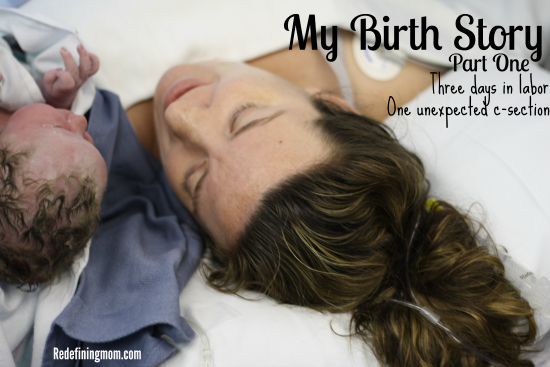 Lydia’s birth story takes place over a period of 3 days. I want to write about it, not only to share it with everyone, but also because at the end I want to open a discussion about three important topics I want to address before having my next child:

I’m going to tell my story over a series of a few posts. This is part one.

My pregnancy with Lydia had been pretty textbook.

The first trimester was met with extreme fatigue and all day sickness. I had moments where I was unsure how any female on this planet made it through pregnancy and other days when I thought “yeah I’ve got this!”

My second trimester brought the rebound of energy that everyone talks about, the sickness subsided and I felt more energetic. I even managed to stay up past 7pm!

My third trimester started off pretty normal but about half way through I started swelling pretty bad and my blood pressure started elevating. I’ve never had high blood pressure before and with the swelling, the doctors started monitoring me for preeclampsia and pulled me out of work 3 weeks before my due date to get rest.

A week before my due date, we were told I would be induced because my blood pressure kept spiking. In hindsight, I wish I had questioned this more because I think it was actually the automatic blood pressure cuff at the doctor’s office that was the issue. Every time I went into the hospital (including the day I checked in to be induced) they never registered high blood pressure. This is just one of many issues with delivering under the laborist model which is when the doctors who care for you in the hospital and deliver your baby are NOT the same doctors that treat you throughout the pregnancy at your normal doctor’s office. The doctor’s at the hospital are staff doctors, usually one attending and a resident along with several students.

On October 14th, 2012 we left for the hospital at 3:30pm. We were so excited to start the induction, scheduled that night for 5pm at Children’s Hospital in Buffalo. We planned to greet Lydia on October 15th, but she (of course) had other plans!

The night of 10-14-12 I was given Cervadil around 9pm to start the induction process, despite not registering high blood pressure at the time. I was told that they would continue with the induction because they wanted to follow my doctor’s wishes. The next morning they started me on Pitocin with the hope of delivering by the evening on 10-15-12. The first night I didn’t sleep well and neither did my husband. Rob was on an uncomfortable recliner chair and I was woken up several times during the night for doctors to run tests.

Monday October 15, 2012 was a hard day. I was put on the Pitocin drip up to the max of 20 over a 12 hour time frame, starting around 11am. The doctors tried to put me into active labor by attempting to insert a foley bulb two times but they could not get through my cervix because it had not softened at all. After 12 hours, I was only 1cm dilated. During this day, no one ever suggested breaking my water. 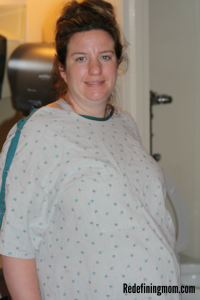 As I mentioned before, Children’s Hospital had moved to a laborist model for deliveries, meaning that every 12 hours the staff and attending on duty would switch and whoever was on staff when I was ready to deliver would deliver Lydia into the world. At the end of the night on 10-15-12 the attending on duty wanted to send me home since I had only dilated 1cm, but shortly after removing the IV, they changed their mind saying that my doctor sent me in for a reason. This was also code for no one knowing what to do with me, although at this point I had not caught on to that.

They wanted to try Cervadil again overnight and put me back on Pitocin the next morning. I was able to get out of bed, eat and take a shower before starting another round on 10-16-12 around 1pm in the afternoon.