Thank you for stopping by! This is my journey of conquering postpartum PTSD due to birth trauma that I experienced after delivering my daughter in 2012. I am currently 11 weeks pregnant with baby #2 and want to share my personal experience to help other moms in a similar situation. 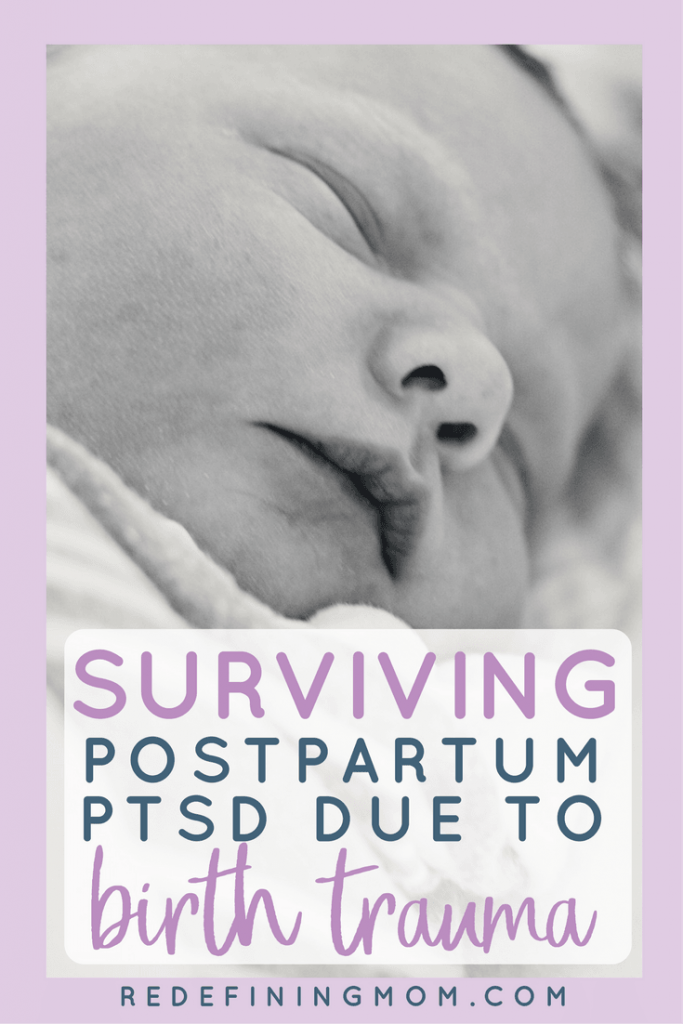 The Birth- How it Started

A few years ago, I wrote out the birth story for my daughter, Lydia. Since then, I’ve taken the time to reread my words and it’s very apparent to me that even then I wasn’t aware of how deeply postpartum PTSD impacted me after her birth.

You can go back and read through her birth story for context. Some of it I will share again here but with a deeper understanding of how it impacted my life for years after she was born.

Lydia’s birth was not typical. After 72 hours of laboring, I was sent for a c-section that resulted in a blood transfusion. I lost consciousness on the table and have distinct thoughts of looking at the ceiling and thinking that I was about to die. I lost consciousness several times throughout the procedure.

At the end of the surgery, the attending on my left congratulated the doctor on my right for “a good job for his first surgery.” 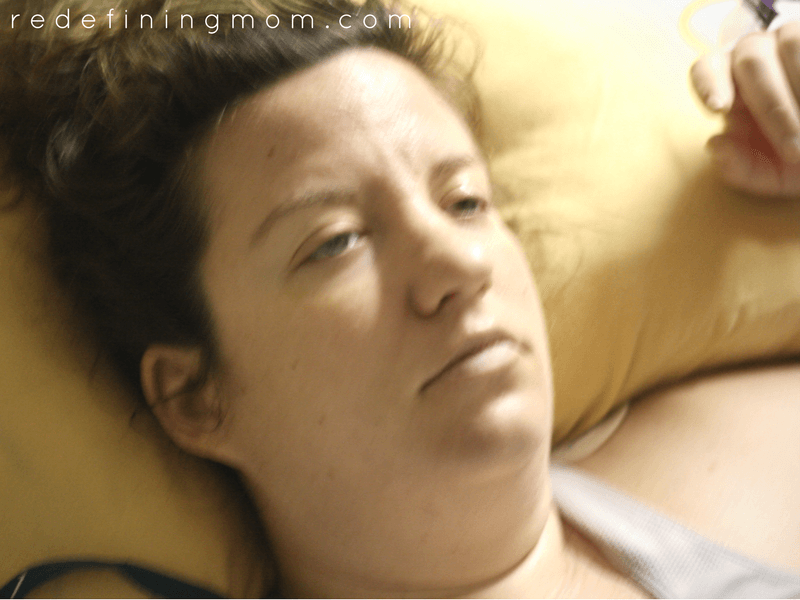 In the recovery room

You can see from this picture of me in recovery that I was not in good shape. I was unable to breastfeed on my own or respond to the nurses or my husband. It took 36 hours for them to give me two blood transfusions that I needed much sooner.

This only scratches the surface of how horrific her birth was for me but one fact remains… I thought I was going to die. More than once.

The First 3 Months of Postpartum PTSD

I can’t speak for everyone, but I doubt anyone thinks the first three months after bringing home a baby are a walk in the park. What I’ve come to realize is that while it’s not supposed to be easy, I think it was a bit more difficult for me than others.

Lydia was colicky and had reflux issues. She cried constantly, had a hard time sleeping, projectile vomited often, and rejected my breastmilk.

We lived in a 3rd story apartment at the time and before she was born we went down to one car to save money. In hindsight, this would prove to be a gigantic mistake.

The first distinct memory I have of feeling not quite right was about two weeks postpartum. My husband left for work and I would cry for 8-9 hours straight. This particular day, Lydia was screaming her head off. Nothing I did would calm her down. I walked over to the window and looked out into a forest of trees and remember thinking, “my life is over.”

Before I got pregnant with Lydia, I was incredibly career oriented. I had a plan to climb the career ladder and never for one minute thought having a kid would derail my plans.

I was extremely independent. I came and went when I wanted to, traveled alone to visit friends all over the country, and generally always had the means to go where I wanted.

Looking out into the forest of trees with a screaming baby, staples in my tummy, swelling still lingering in my legs, no car, no family nearby, and no way out. I suddenly felt like the walls were caving in around me.

I remember quite a few days like this and I didn’t say much about it to my husband because it confused me. I always wanted to be a mom and frankly, I’m pretty sure I thought it was supposed to be a little bit more idyllic than it was turning out to be.

Eventually, I started to cope with my feelings by diving in head first to hunting for a house. I knew enough at this point to realize that I would never have another baby if I felt trapped like I did this time.

By the time the house closed in early 2013, it was time to head back to work. 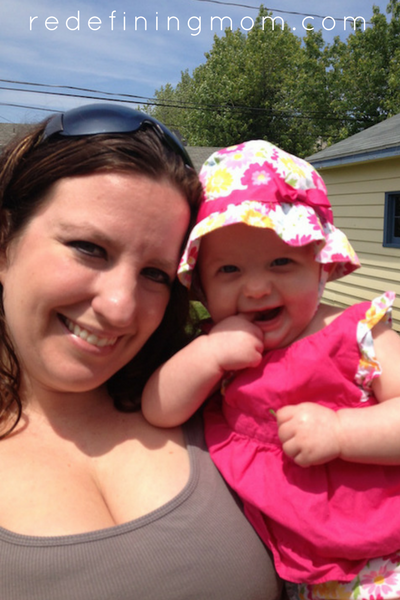 Maternity Leave is Over

You can read more about my opinions on maternity leave in the United States and some of my thoughts on corporate America for working moms but I don’t want to make this story about how terrible the system is for working moms.

Corporate America is definitely not structured for the working mom but I noticeably had a much harder time adjusting than my fellow working moms.

Going back to work did little to help my feelings of isolation. By March of 2013, we had invested in a second vehicle out of necessity. However, our days were 12-13 hours long when you factored in our morning routine and driving our daughter to and from her daycare arrangements.

It left little to no time for anything.

Within 3 weeks of going back to work, I received a promotion. Fourteen months after that I received a second promotion which led to a lot more travel.

Life was out of control. I barely could hold anything together. But, here’s the funny part, no one around me knew it. I have always had my shit together and to the outside world, I was actually more on top of things than I was before I became a mom.

Control was self-preservation for me. If I lost control, I knew I was a hair away from spiraling into a deep dark hole. 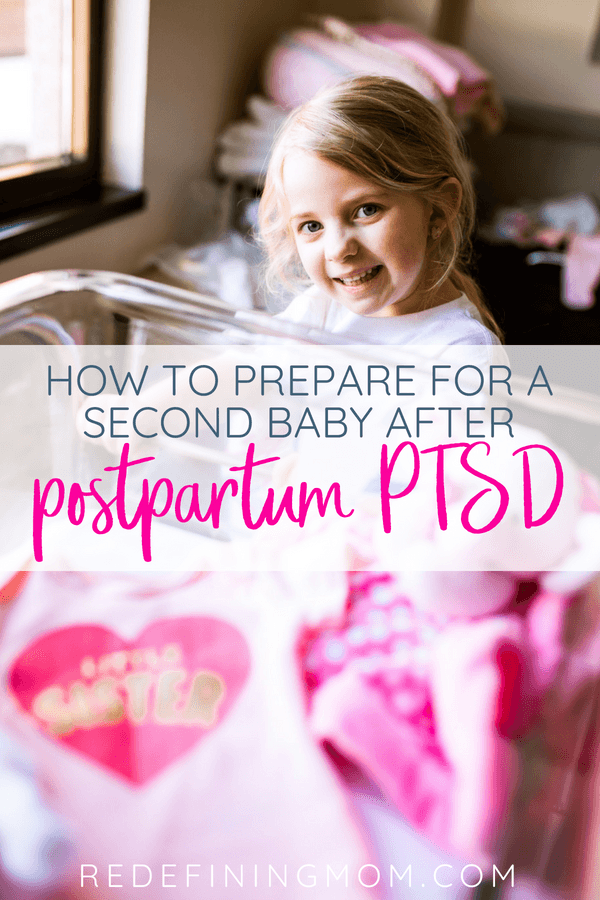 We Want Another Baby

In March 2014, my husband started asking me about getting pregnant. He really wanted our kids to be close together in age. So did I…in theory.

In reality, wanting another baby was the trigger that sent everything crashing down.

All of the rigid control I had maintained exploded in a ball of fury at my husband. I told him I wasn’t ready and yelled at him for even asking me to do it again so soon. I couldn’t believe he thought I was ready to go through another pregnancy and birth again. I barely held life together with an 18-month-old.

My husband had no idea how bad it was because as I would come to learn, I never said a word.

I’m an extremely vocal and outspoken person but aside from the typical complaining I did when things got busy, I never expressed how severe my feelings really were inside.

I didn’t tell him because I didn’t understand. I thought all moms felt the same pressure, isolation, and anxiety that I was feeling.

Postpartum PTSD can cause feelings of isolation and anxiety that can last for years after giving birth! Click to Tweet

At my first appointment in March 2014, it was very apparent to the doctors that I was suffering postpartum PTSD due to birth trauma.

When I arrived for the appointment, they assumed I was there for my annual checkup as a new patient. I told the receptionist when I made the appointment I wanted to interview the doctor before becoming a patient. Signals got crossed and the doctor was not prepared to talk with me when I arrived. This prompted me to break down into a snotty-nosed meltdown. It felt like it came out of nowhere but they instantly recognized it as something more.

The Diagnosis- What is Postpartum PTSD due to Birth Trauma?

Postpartum PTSD? What the heck is that? I’m not depressed. I love my daughter. I never had any feelings of anger towards her or suicidal thoughts.

My initial reaction was, “nooo, that can’t be it!”

Here is the problem with both postpartum depression and postpartum PTSD, the symptoms are often too generalized in society. The truth is, sometimes these problems present themselves in very subtle ways. Signs can be hard to distinguish between what’s “normal” or something to be concerned about. Since I was 18 months postpartum, I certainly didn’t think postpartum issues were still possible.

For me, my issues were a direct result of the trauma from Lydia’s birth. I had a real fear that I was going to die on the table and she’d grow up without a mother.

The symptoms I exhibited for years (and still to this day) include:

This is not all of the symptoms but these were the most significant.

After the doctor suggested that I go see a therapist to cope with postpartum PTSD it was like a light went on. I went home and immediately started researching postpartum PTSD due to birth trauma and was relieved to find that many of my symptoms matched.

Putting a name to a dark face provided the clarity I needed to begin to heal and accept what I had gone through.

By her second birthday in October 2014, I had been seeing a therapist for a few months and began to work through many of my feelings. Two years into being a new mom and I started to feel like myself again.

In December 2014, I went off birth control. My husband and I assumed that we would get pregnant immediately because Lydia had been conceived while I was on birth control.

Two years later in December 2016, we were still not pregnant.

Truth be told, every month I got my period it was a bit of a relief. While I had mostly healed from the birth trauma, I was still terrified of going through a birth again.

Finally, in early 2017, I asked my OBGYN if she could refer me to a fertility specialist. I had just turned 32 and Lydia would be 5 soon. In my mind, it was now or never.

In my next article (coming soon), I’m going to share with you our struggle with secondary infertility and what we did to finally get pregnant. As of this writing, I am 11 weeks pregnant!

I am happy to be having another baby but I am also terrified.

The aftermath of trauma doesn’t ever go away completely. It’s always there. It’s part of my DNA.

Postpartum PTSD never fully goes away, it's always there lingering. You learn how to cope... Click to Tweet

Sometimes the thought of going through the recovery from a second c-section brings on intense anxiety and near panic attacks. I’ve even wondered why on earth I decided to get pregnant again. Then I immediately feel guilty that my second child will think I don’t want him or her.

But here’s the thing, I’m not apologetic for my feelings. They are real and it’s necessary to feel them so I can learn to cope with them.

As my pregnancy progresses, I can’t wait to share with you how I cope with the constant fear of giving birth again and the plans I make with my new OBGYN to curb some of the issues I experienced the first time.

If you’ve experienced postpartum PTSD, I want you to know you are not alone. Don’t apologize for your feelings or your experience. It’s real. It hurts and you have every right to feel the way you do. I want you to get help so you can heal and move forward. You deserve to be free from your pain.

I’ve listed resources below that can help you if you suffer from postpartum depression or postpartum PTSD.

We’re in this together!

I’ve been fortunate to share my story in several different publications.

How the DockATot Helped Me Heal After My C-Section

Set up your own Amazon Baby Registry!