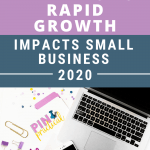 In April, Pinterest became a publicly-traded company. This was a significant event for Pinterest and more importantly, YOU. Now, we get a close look into Pinterest’s growth in 2020.

This is one of those long posts where you might be tempted to close this tab and move on. I promise if you give me 15 minutes of your time today, you won’t regret it. In this post, I’m going to give you the reasons why Pinterest is a huge opportunity for your business backed by real data + what you can do right now to cash in on a profitable marketing strategy.

If you create content, sell products, or offer services and have relied on traffic and sales from Pinterest in the past… things started to change for you when Pinterest became publicly traded.

Since I offer the only comprehensive training on promoted pins (aka Pinterest ads) on the market today, it’s my job to follow what’s going on with Pinterest’s stock and report that information back to you.

Honestly, Pinterest being a publicly-traded company means we now have a front-row seat to exactly what’s going on behind the scenes. I’m talking juicy facts that can impact your profit from Pinterest marketing.

Pinterest is required to report quarterly on their earnings in a report called the 10-Q with the Securities and Exchange Commission (SEC). Once again, I sat down and read the entire 70-page report for you!

As someone you’ve trusted as a source of Pinterest knowledge, I believe it’s my job to educate you on what it means for your business. I’ve seen the backend of more than 2,000 Pinterest ad campaigns and personally supported hundreds of thousands of dollars in Pinterest ad spend.

The information I’m providing below is not regurgitated information I read in some highlight reel from Google Alerts. I took the time to read the entire 10-Q report so I could give you a fair and balanced opinion about the future of Pinterest and how it may or may not be a good bet for your business.

**Please note: What you will read below is my interpretation of Pinterest’s S-1, 10-Q, and 8-K filings. It is up to you, as a potential advertiser on Pinterest, to do your due diligence and research before investing marketing dollars on the Pinterest platform.**

Are you ready to dive in?? 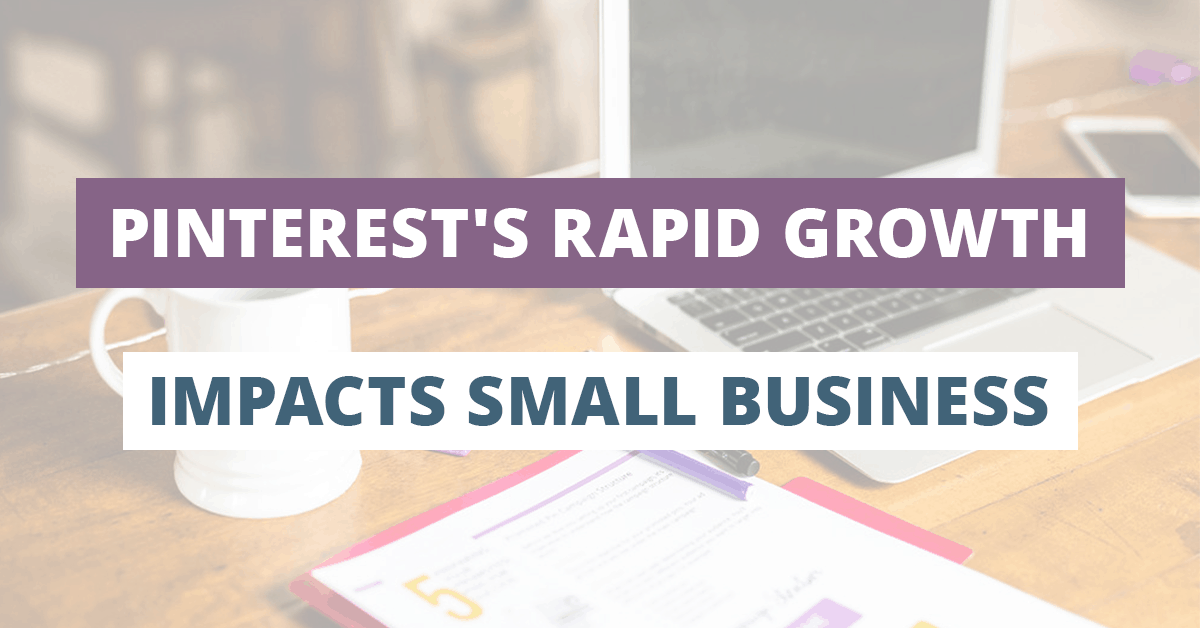 In Pinterest’s official S-1 filing to the SEC to become a publicly-traded company, Pinterest laid out a lot of interesting facts about where they stand as a company and where they are headed.

The only way Pinterest brings in revenue and thus profit for their shareholders is through offering ads, known as promoted pins.

This logically means if Pinterest is going to be a major player in your business then understanding the value proposition for advertising on the platform is going to be your key to success.

Pinterest laid out its value proposition for advertisers with the following demographic facts.

That sounds great, but what happened once Pinterest stock started trading?

Ahh, the million-dollar question. It’s exactly what every single investor was asking themselves. Will Pinterest live up to their potential or fall flat on its face?

One of the biggest criticisms, when the stock launched, was that it was overpriced.

The first 12 months of a new publicly-traded company are key to understanding the companies longevity in the market.

In evaluating Pinterest’s most recent 10-Q report and 8-K report I asked myself two main questions:

If that’s good enough for you, you can fast track your way right to learning Pinterest ads here.

If you’re a fact-finder like me… read on. There is lot’s of data and tips below to help you make an educated decision about Pinterest for your business!

This is a 62% increase over Q2 2018. <– Remember, this revenue comes directly from advertisers on the platform.

Ad spend quadrupled in Canada. <– This is really good news. One of the risks that Pinterest pointed out in their IPO filing was that they had a weak international presence and needed to diversify the regions their revenue was coming from.

The average revenue per user in the US is $2.80 which is a 41% increase from the previous year. <– Think about this, an active user is spending more on Pinterest and the active user count keeps increasing. This is a very good situation for advertisers like you and me! 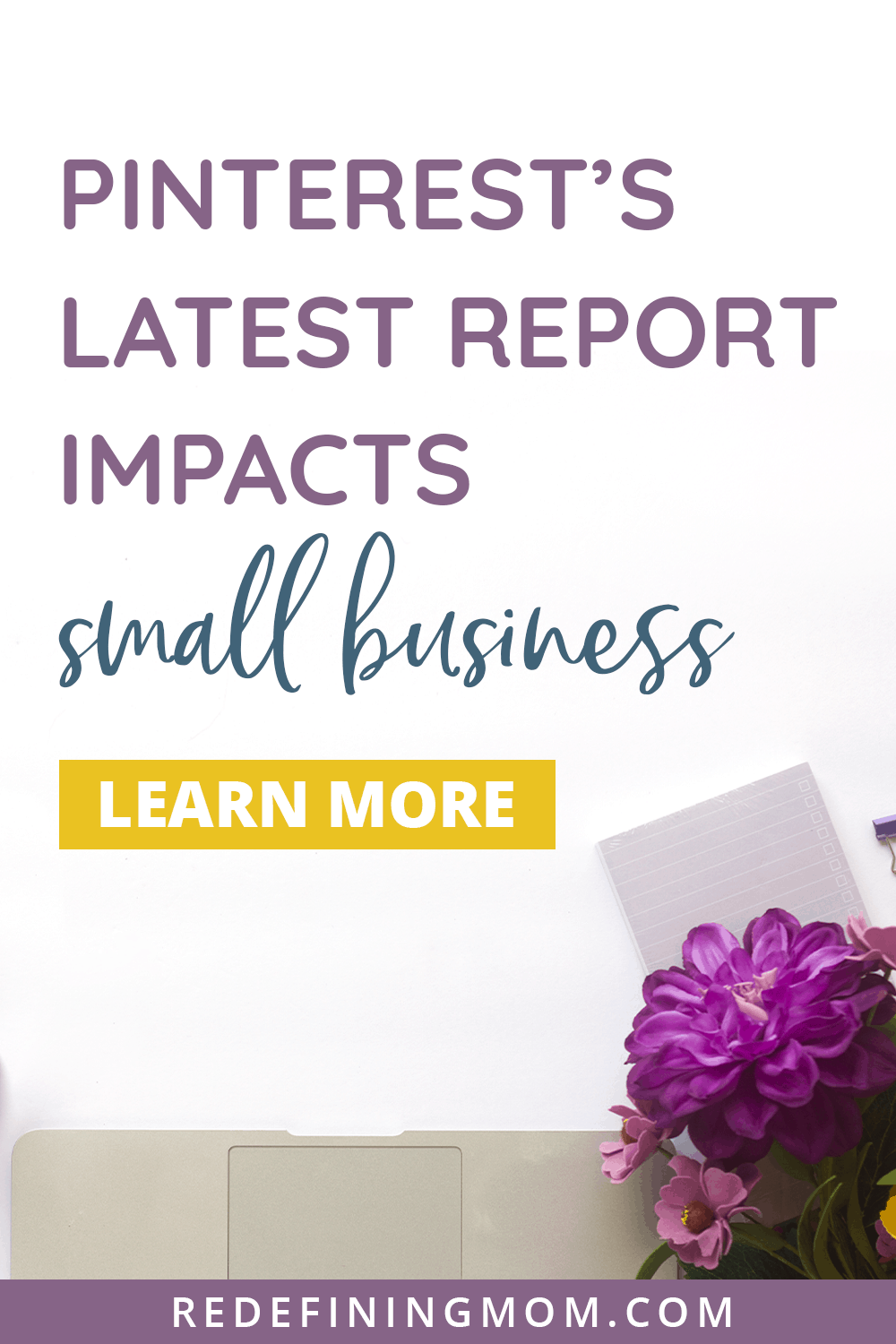 This helps them compete with tech giants Facebook and Google by making ads more accessible to potential advertisers. <– Important note: never start an ad from your mobile app! You always want to start your ad from the backend of the ads platform.

Focus on improved personal user experience on the platform.

They are accomplishing this by focusing on providing personalized search recommendations to its users. Pinterest is reporting this new service has rolled out to approximately one-third of its users.

Pinterest is reporting that video pins are saved 40% more often than static images. Video views are also steadily increasing on the platform.

Significant strides have been made with shopping catalogs on the platform.

Pinterest says, “Pinners who have engaged with a brand can now see a module in their home feed that connects them to a catalog of Pins from that brand. And when a product Pin is clicked, more products from that brand now appear in the close-up so Pinners can browse by retailer, not just by visually similar items.”

Lack of new ad products. I could argue their new ad product is shopping ads or even video ads but I don’t think that’s good enough. Just like Facebook, they will need to diversify their advertising sources. This may need to come in the form of an acquisition. Think about what Instagram did for Facebook!

Inability to move video impressions/views to clicks. The way Pinterest has video pins set up is incredibly frustrating. You cannot click on a video pin and go directly to a website. You have to open the pin and click a grey button with the web address. It is NOT intuitive at all. However, with video ads, you can click directly on the video and be taken directly to the website. This is making video ads way more appealing to advertisers.

Trying to compete with Instagram by launching story pins. Pinterest acknowledges that Instagram collections and Google image search results are direct competitors to their services. They also acknowledge that Instagram is making big moves in becoming shoppable in similar ways. Focusing on story pins as a means to compete with Instagram is a big miss in my opinion. I believe they should be focusing more on the shoppable aspect at this point. 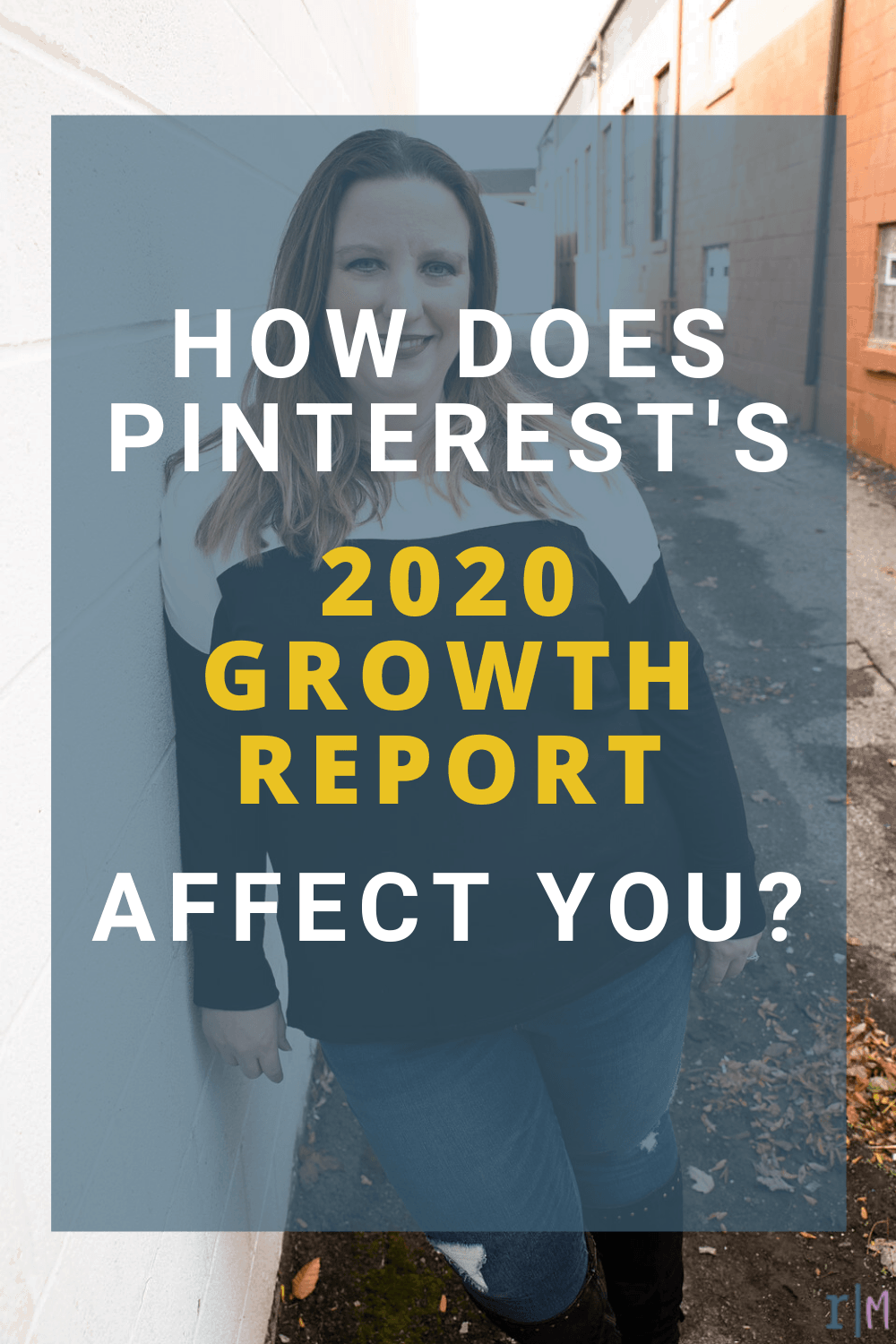 Tucked under one of the numerous financial reports, I found this statement which tells the story of why you need to jump on Pinterest ads right now…

More businesses are starting to see the revenue potential for Pinterest and they are spending their marketing budgets on the platform now.

The more businesses that advertise, the more money Pinterest can charge to serve the ads.

Now you may be thinking… Monica, why would I want to pay more? This isn’t good!

This is great news as long as you know how to run Pinterest ads the right way. Which is exactly what I teach you how to do inside of Pin Practical Promotions… how to run profitable ads while keeping your costs down.

Here’s a secret I’ll let you in on…

There is a huge ad inventory (meaning ad slots for Pinterest to fill) that are going unused right now! Small businesses (like us) are perfectly primed to swoop in and take these ad spots.

All of this works together. Pinterest is actively making improvements to its user experience and attracting more active monthly users so it has more ad spots to serve ads. Pinterest is very well aware that if they don’t keep a healthy active user base then there is no value proposition for businesses to pay for ads.

Even more so, Pinterest acknowledges that its success depends on serving relevant results to its users. They are actively investing in making a more personal user experience which can only benefit us as advertisers. Reach more relevant people with our ads? Yes, please!

More users who want to shop + Your ads = More revenue for YOU!

This is a win/win situation for us right now!

It’s like a perfect storm for new advertisers to come in and learn the ropes before the news gets out that Pinterest is a revenue-generating paradise!

Now you have enough information to make an educated assessment about whether Pinterest is right for your business.

If you’ve concluded that your potential customers are on Pinterest and you’re missing out on a goldmine… you’ve come to the right place!

In my signature course about Pinterest ads, Pin Practical Promotions, you’ll learn how to properly lead your Pinterest visitors through a customer journey that leads to sales, email subscribers, and new clients for your services.

Once you have the right funnel in place (I show you 3 funnels that convert super well on Pinterest in the course), you’ll drive targeted traffic to your site using Pinterest ads.

Are you wondering why so much focus on setting up a funnel for Pinterest?

One differentiating feature of our platform is that advertisers have the opportunity to put relevant content in front of Pinners at every stage of the purchase funnel, including during the early intent phase.

I’ve received an influx of requests to enroll in Pin Practical Promotions, your next-level course on how to strategize, implement, analyze, and refine profitable promoted pin campaigns at a low-cost to you!

With over 1,000 students already enrolled in Pin Practical Promotions, I know what you need to do to be successful at running Pinterest ads.

You’ve got this! I can’t wait to help you scale your business with Pinterest ads.

The Best Types of Pinterest Ads for Driving Sales 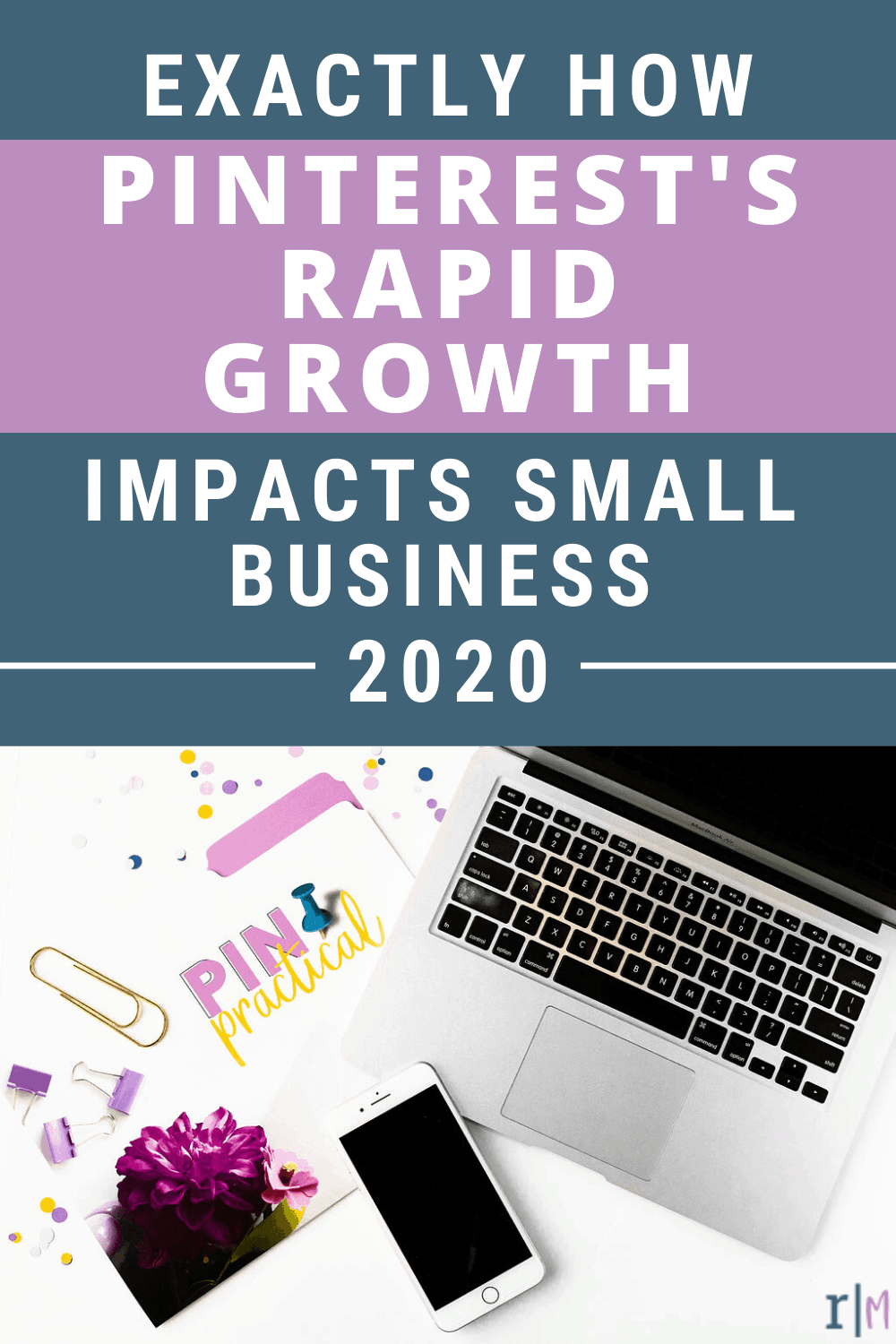